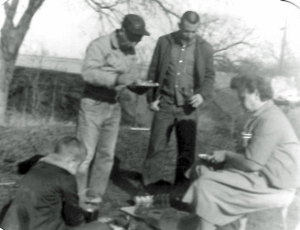 I awoke to the familiar sound of dishes rattling in Mother’s kitchen and to the thick scent of coffee wafting through the air. I glanced out my bedroom window; the neighborhood was lit by the first rays of the day shining through a thin layer of gray clouds. The trees, no longer their virescent hues of spring and summer, were scarlet, gold, and copper. Mesmerized, I watched the leaves fall off the trees gently swaying in the November wind. A sigh rose in my throat as I thought about what was lacking that Thanksgiving Day.

I joined Mother in the kitchen, mildly curious about the Thanksgiving brunch she’d planned for us at an undeveloped park outside of town. Instead of cooking the usual Thanksgiving fare, Mother prepared a thermos of hot cocoa for my brothers and me and another thermos of coffee for her and Father.

“This will be fun, sweetie. Wait and see.”

I smiled, covering up my disappointment, and helped Mother pack a box with the utensils she’d need; a cast iron skillet, tin plates, charcoal briquettes, matches, a spatula, and two wooden spoons. Father loaded the box into his truck while my brothers and I clambered into the truck bed. He pumped the gas pedal several times until his cranky jalopy sputtered into action.

On the way to the park, Father pulled into the parking lot of a local grocery store; through the rear windshield, I watched my parents cull through their pockets, the seat cushions, and the glove box gathering all the loose change they could find. “This should be enough,” Mother said in a thrilled voice. She scurried out of the truck and emerged minutes later, smiling with two dozen eggs, a pound of bacon, and a small loaf of bread in her arms.

Once at the park, my brothers and I bolted from the truck, frolicking in the leaves as we ran along a pathway that led to an old abandoned farmhouse. While they explored the farmhouse, I sat on a log; closed my eyes; and took in all the crisp autumn air my lungs could hold slowly expelling it. In the distance, I heard Father whistling and Mother singing as they fried bacon and eggs over a crackling fire, seemingly oblivious to the fact that our grim financial situation prevented us from celebrating Thanksgiving as we always had with turkey, dressing, and all the trimmings. 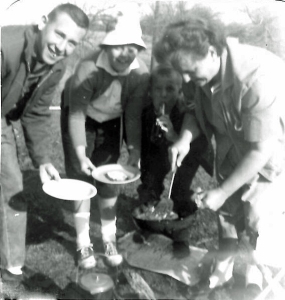 “Come and get it,” Mother hollered. We dashed toward them and sat on the ground, warming our hands on the open fire. Mother scooped fried eggs and bacon onto our tin plates. “Let us give thanks, for we have enough,” Father said, his face beaming.

“Enough?!” I looked down at the meager amount of food on our plates, my eyes misting with tears.

What a blessing hearing that word was, for acknowledging enough squelched my expectations; diminished my disappointment; and helped me realize that enough is at the core of gratitude and Thanksgiving.

A teacher’s unexpected whisper, “You’ve got writing talent,” ignited Sara’s writing desire. Sara ignored that whisper and pursued a different career but eventually, she re-discovered her inner writer and began writing. Her manuscripts have been published in anthologies and magazines including Chicken Soup for the Soul, Guideposts, Times They Were A Changing, and Wisdom Has a Voice. 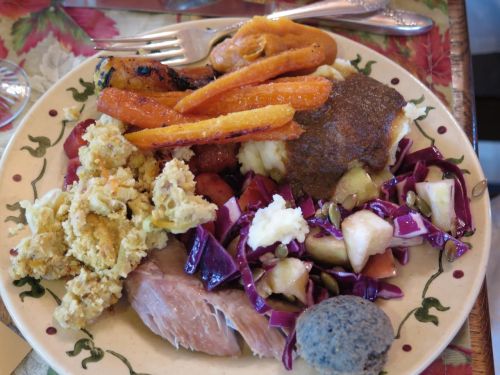 The day before Thanksgiving, I finished setting the table in our farm’s community room for the next day’s feast. On the way back to the house, I stopped in the barn to check on the 30-pound turkey in the barn fridge, the only cold place large enough to hold it. Truthfully, we didn’t need a 30-pound turkey, but somehow my order ended up in the “extra large” category. I wasn’t even sure it would fit in our oven, not to mention having to get up an hour earlier to give those extra five pounds time to roast.

I opened the barn fridge door, expecting the top shelf to be full of turkey. The shelf was empty. The second and third shelves (too small for the turkey anyway) were empty. I even looked in all the fridge drawers and door shelves where a 30-lb turkey obviously could not hide. I looked all over the barn, thinking John had left the turkey out accidentally. I even looked back in the fridge again to be sure I wasn’t overlooking something. Still no turkey.

What to do but go ask John if he’d brought the turkey in the house. No. So where’s the turkey? Then I remembered it was Wednesday, the day the food pantry people come for the veggies we donate to community families every week. Every Tuesday, I send an email to the friend who picks up our veggies to tell her what we have. I looked back at that week’s email and saw that I had mentioned the turkey on the top shelf because I needed to let her know the veggies were on the second shelf this week. Re-reading the note, I realized that she must have sent someone else for the pick-up. Even though the turkey part of the message was vague, I knew she would never have interpreted it to mean “take the turkey.” On the other hand, someone less familiar with our arrangement certainly could think a turkey donation accompanied the vegetables.

Since the pantry was closed for the day, I tried to contact my friend but couldn’t reach her. Now the need for logistics took hold. It wasn’t that we minded the turkey having gone to the pantry, but we still needed a turkey—and it was 4 PM the day before Thanksgiving. Would we really be able to find an organic turkey at this late hour?

John jumped in the truck while I called a local store to reserve a turkey—hopefully. Yes, they had an organic turkey—21 pounds, which was plenty—and they’d hold it for him. When John got home, he said everyone in the meat department had a good laugh about our “donation.”

I was glad, in fact, not to cook that big turkey. We had plenty at our Thanksgiving meal, with most of it—potatoes, leeks, squash, onions, carrots, beets, herbs—grown on our own farm. Seated by the wood stove as the snow fell gently outside, we thought about all the Thanksgiving dinners including something from Stonebridge, from vegetables on the table to the wine we’ve grown and vinted—to the turkey in the barn fridge. We laughed at the gift of a good story with which to remember this very Thanksgiving, a reminder of gratitude for all we have and can share. For this and so much more, we are thankful. 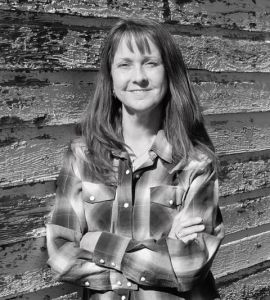 Kayann Short is an SCN Star Blogger and the author of A Bushel’s Worth: An Ecobiography (Torrey House Press), an award-winning memoir of reunion with her family’s farming past and call to action for farmland preservation today. See kayannshort.com for more on her writing workshops and retreats at Stonebridge Farm and follow her at pearlmoonplenty.wordpress.com. 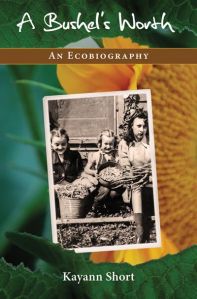