Gravel crackled under our tires as Bill and I crept down Old Mill Road, a meandering country road on the outskirts of Collin County. The countryside stretched before us like a great quilt of golden, brown, and green squares held together by the thick green stitching of the hedgerows. The sun overhead was radiant, its light bathing the scenery in a welcoming glow. We slowed our car to a near stop and rolled down our windows, taking in the unfamiliar sights, sounds, and smells.

Hay bales dotted the landscape.  A tractor kicked up dust in a nearby field.  Wildflowers, dandelions, and purple thistles covered the road’s shoulder, filling the drainage ditches with an array of color.  We heard the whicker of horses, the braying of donkeys, and the burble of water running along a small stream.  We inhaled, the sweet aroma of trees, grass, and earth filling our nostrils. 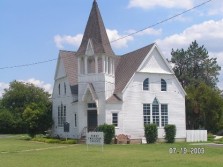 The gravel road turned abruptly, replaced by a narrow, two-lane county road. We continued driving, finding our way into downtown Anna where we discovered renovated historical building—a turn-of-the-century general store, the First Christian church, and an old train depot.  We paused, both feeling inexplicably drawn to the quaint little town. We drove a bit further until, much to our surprise, we saw a housing subdivision under construction on the outskirts of town.

“Who would’ve thought there’d be a subdivision out here in the middle of nowhere, Bill said.  “Let’s take a look.”

We entered the sales office where a folksy, sales rep greeted us and walked us through the models. We found a floor plan we liked and without hesitation put down a contract on a home, believing we’d been guided to do so.   After settling in, we often sat on our front porch, amazed at the number of cardinals congregating in our trees.

One afternoon, my aunt dropped by. “What a coincidence,” she exclaimed.  “Your great, great grandmother, Rebecca, moved to Anna with her husband and their daughter, Sara Virginia, around 1895.  You’re Sara’s namesake.”

“What?! I certainly never knew.” 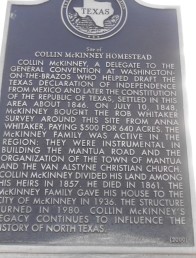 Weeks later, the historical society placed a historical marker within our subdivision just one-half from our house documenting that the land and surrounding area was the original homestead of Collin McKinney, a pioneer who helped draft the Texas Declaration of Independence and later the Constitution for the Republic of Texas.  We’d known for years that Collin McKinney was my husband’s great, great, great grandfather, but had no idea we were actually living on the land that was once his homestead.  Another coincidence? Perhaps.

I’m convinced that living in Anna was part of a grand, synchronistic plan nudging us to return to the land of our ancestors. As for the cardinals. They still congregate in our trees, bearing witness to this quote: When a cardinal appears in your yard, it’s a visitor from heaven.  I’d like to believe that Rebecca, Sara Virginia, and Collin McKinney are such visitors, and I delight in seeing them.

Her manuscripts have been published in anthologies and magazines including Chicken Soup for the Soul, Guideposts, Times They Were A Changing, and Wisdom Has a Voice.